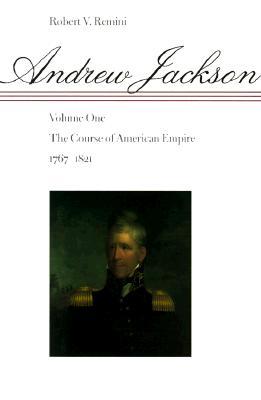 “Andrew Jackson: The Course of American Empire (1767-1821)” is the first of three volumes in Robert Remini’s series on Andrew Jackson.  This first volume was published in 1977 and the series was completed seven years later.  Although highly regarded, the series does not seem widely read. Remini’s 1988 single-volume abridgment of the series, however, remains quite popular despite the publication of more recent biographies of Jackson.

Remini was a historian and professor at the University of Illinois and authored several biographies during his forty-year literary career (of John Quincy Adams, Henry Clay and Martin Van Buren, among other notable figures).  However, he was best known for his exhaustive study of Andrew Jackson. Remini died earlier this year at the age of 91.

This initial volume of Remini’s series focuses on the first fifty-four years of Jackson’s life – from his youth through his service as governor of the new territory of Florida.  This swath of his life also encompasses his service in the American Revolution, his work as a lawyer and frontier prosecutor, his representation of Tennessee in Congress, his time spent as a judge and his extensive – and highly conspicuous – service as…