Published 100 years after Calhoun’s death, Margaret Coit’s “John C. Calhoun: American Portrait” won the 1951 Pulitzer Prize for Biography. Coit was an author and historian also known for her biography of financier and presidential adviser Bernard Baruch. She died in 2003 at the age of 83.

The product of almost a decade of research (which immediately followed her graduation from college), Coit’s biography was sparked by her long-time fascination with Calhoun. It is hardly surprising, therefore, that this proves a decidedly sympathetic, though not uncritical, exploration of his personal and political lives.

Modern readers will find Coit’s writing style “dated” and occasionally a bit daunting, particularly in early chapters. But the biography is filled with lofty, soaring prose and countless colorful scenes which are more reminiscent of “Gone with the Wind” than a history text. Well before its halfway point, most readers will be fully entranced by the narrative and this biography might be stuffed with more clever one-liners than I’ve ever seen in one place.

Coit’s observations – generally of Calhoun’s political philosophies and activities, but also his personal life and personality – tend to be incredibly perceptive and deeply insightful. But some of her perspectives on the civil rights issues facing Calhoun are rooted in, and somewhat shaded by, her own era. Nevertheless, they are keen and thought-provoking even from our more enlightened point-of-view.

Among her many strengths, Coit is uncommonly skilled at studying people and making potent, penetrating observations of their actions and character. Her commentary on members of James Monroe’s cabinet provides an early example of her witty distillations and her comparison of Jefferson Davis to Calhoun is both riveting and revealing.

The most interesting individual components of the book include Coit’s review of the presidential campaign of 1824, a noteworthy introduction to Nicholas Biddle (president of the Second Bank of the United States) and a particularly entertaining discussion of the break between Calhoun and Andrew Jackson and their lingering hatred of each other.

But while this is among the most compelling of the two-dozen Pulitzer Prize-winning biographies I’ve read, it is not without noticeable flaws. The most obvious of these is Coit’s fondness for her subject. At various points in the book Calhoun is portrayed as too heroic, patriotic or brilliant. For his zealous defense of slavery, Calhoun is almost canonized. And James Monroe and John Quincy Adams would be surprised to know how much of the credit for the Monroe Doctrine Calhoun is due.

Coit also occasionally accepts apocryphal anecdotes as fact and one gets the sense that some of the early narrative is imputed – describing, without evidence, what might have happened almost as though it did. Combined with an ability to describe scenes with a grandiose flair, some of the book’s early passages feel a bit like historical fiction.

Finally, there are curious misspellings to be found including the name of an early James Madison biographer (Sydney Gay) and, with startling consistency throughout the book, the first name of Madison’s wife (Dolley).

Overall, Margaret Coit’s Pulitzer Prize-winning biography “John C. Calhoun: American Portrait” is a lively, colorful and often masterful examination of the personal and political lives of an important American statesman. While its writing style can be an acquired taste, readers with modest perseverance – or an interest in America’s antebellum political scene – will find this biography unusually engaging, informative and thought-provoking.

N.B. For a host of reasons I feel compelled explore the possibility of eventually reading one or both of: Merrill Peterson’s “The Great Triumvirate (Webster, Clay, and Calhoun)” and H.W. Brands’s “Heirs of the Founders: The Epic Rivalry of Henry Clay, John Calhoun and Daniel Webster.”

Peterson’s book seems to run the risk of proving dense and/or dry while Brands’s book appears too brief to do its characters (or their interactions with each other) full justice. As always your thoughts are greatly appreciated!

And I’m looking forward to the publication of Robert Elder’s upcoming biography “Calhoun: American Heretic” which is expected February 16. It seems to promise a more balanced and modern view of Calhoun than is afforded by Coit’s biography. And who doesn’t want…more John Calhoun! 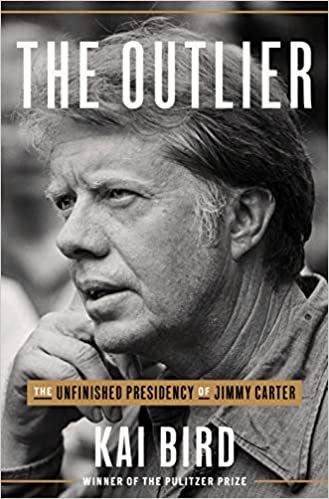